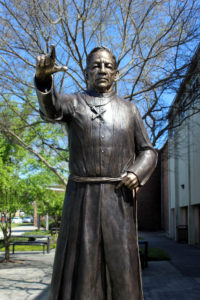 The Brother Martin sculpture by Kim Bernadas was dedicated and blessed at Brother Martin High School on Jan. 22, 2019. It was the 50th anniversary of the opening of the school and the 150th year of the presence of the Brothers of the Sacred Heart in New Orleans.

Kim Bernadas was commissioned by the Brother Martin High School to sculpt a life-size sculpture of Brother Martin cast in bronze. It is an original design. Brother Martin came to New Orleans in the 30s, became principal of St. Aloysius until 1949. He built Cor Jesu along with high schools in Baton Rouge, Dallas, and in Queens, New York. He built a school for the Brothers of the Sacred Heart in Mobile and another one in Uganda, for African members of his order. He served as provincial of his order for nine years. H died at age 87 after having been a Brother of the Sacred Heart for 72 years. In his last will and testament, he said: “If I have done any good in my life, it was done only because God used me as His instrument.”

Kim Bernadas works in both figure and portrait sculpture using a classical approach achieving an uncanny likeness to her subjects in her portraiture. In her figures, she uses gesture, proportion, and the uniqueness of each individual to express the essence of the subject. With a background as a physical therapist and a former ballet instructor, Kim has had a life long study in the dynamics of the human form. Her artistic training began at New Orleans Academy of Fine Art in 1991, where she presently teaches portrait and figurative sculpture. Additionally, Kim conducts Sculpture intensives at several locations in the Southeast throughout the year. Her professional career has included many public and private collections throughout the United States.