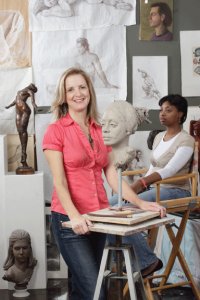 Look at the latest public work by Kim Bernadas and the classical influences that inspire this New Orleans sculptor are clear. Called Birth of a Muse, the bronze nude rises resplendent from a giant fleur-de-lis. But to see what informs another, more intimate body of Bernadas’ work, all you have to do is stroll the city’s streets and look around.

“I like the real, everyday New Orleans person’s face; they have stories to tell,” Bernadas says. “It’s usually only wealthy, prominent people who have a portrait sculpture done of them. I want to give some respect to the ‘every guy’ on the street or the lady who worked at the hospital for 40 years.”

Bernadas is working on just such a collection of distinctive, charismatic faces. She finds material everywhere – and especially as she makes her rounds as a physical therapist, visiting clients from every walk of New Orleans life.

Bernadas was well into her physical therapy career when she began developing her talent for sculpture though classes at the New Orleans Academy of Fine Arts. Today, a double parlor in her Garden District home is filled with models and portraits in progress, and she’s now an instructor at the academy herself.

“People think because of my physical therapy background that I must have an edge with this,” she says. “You do know the muscles, but it’s engaging a different part of your brain. You put yourself in the mind-set that you’re not just copying; it’s not just a mannequin of someone but a true likeness; you’re trying to get their spirit. That’s why I love portraits. Every time I do one, I feel like it’s the first one.”

Bernadas was recently invited to join the prestigious Portrait Sculptors Society of the Americas, and her commissions, both public and private, appear around the region. Birth of a Muse was unveiled in September in the Lower Garden District.

“She brings the feeling of the past, this classical inspiration,” Bernadas says of the muse figure. “But it’s also a renewal, too, and I think that fits with the neighborhood there. People tell me it’s pretty but also sensual, and I think that describes New Orleans.”

You can find Birth of a Muse by Coliseum Square near the corner of Prytania and Terpsichore streets.